The Labour Party has always been about people, from our members who contribute to making our policies to the implementation of those policies to build a better Britain for everyone.
Read More

Read more about the invaluable work carried out by the Labour Party both locally and further afield. If you'd like to get involved do get in touch, we'd love to hear from you.
Read More

Would you like to get involved with Spelthorne Labour? We always have things which anybody can help out with; and getting involved is a great way to learn some new skills and meet new people.
Read More

Spelthorne is a big place, so we needed a lot of leaflets. ​ Our Parliamentary Candidate Rebecca Geech was busy too.

The Spelthorne Labour Party will be out across Spelthorne over the coming months. Contact us to get involved!

Feet on the ground
Read More >>

Read More >>
The Labour Party is a democratic socialist party. It believes that by the strength of our common endeavour we achieve more than we achieve alone, so as to create for each of us means to realise our true potential and for us a community in which power, wealth and opportunity are in the hands of the many not the few, where the rights we enjoy reflect the duties we owe, and where we live together, freely in a spirit of solidarity, tolerance and respect.
PRESS RELEASE

Surrey Labour warns that stopping COVID-19 support measures will damage poorest families.
The Labour Party in Surrey is calling on the county’s Conservatives MPs to urge the prime minister not to cut the level of support for the poorest families, warning many Surrey households are ‘teetering on the brink of financial ruin’.
Cllr Robert Evans who represents Stanwell and Stanwell Moor on Surrey County Council said he was really worried that the government’s plans to end several coronavirus-related support measures risks making life almost impossible for some of the poorest families in Surrey.
‘Next week, the ban on evictions is scheduled to end (January 11th)’ said Cllr Evans ‘and the ban on home repossessions from January 31th.’
‘I’m pleading with the Tory MPs to put pressure on Boris Johnson to put a stop to this plan. If these evictions and repossessions are allowed to go ahead, some families in Surrey will be turfed out of their homes through no fault of their own, just the knock-on effects of COVID-19,’ added Mr Evans.
Cllr Arran Neathey, Labour leader on Runnymede Council is also calling on the government to keep the £20 a week Universal Credit uplift in place, adding,

‘According to recent figures nearly 10,000 16-24 year olds in Surrey are claiming Universal Credit, compared with less than 2,000 last year. Cutting this will mean real hardship for them,’ said Cllr Neathey.
‘On top of that, we know we know millions of self-employed people have also been excluded from nearly all forms of support since the Corona virus crisis began,’ said Arran Neathey.
Nick Palmer, Labour leader on Waverley Council said, ‘The government and their Surrey’s MPs must recognise that it is their political priorities over the last ten years that have contributed to the crisis now hitting the poorest people in this generally rich country. The years of austerity have left many UK households without any savings to fall back on.’

‘people must never forget, all Surrey’s MPs voted to cut school meals– before footballer Marcus Rashford forced a U-turn,’ said Cllr Palmer. ‘One day they must surely recognise the desperate situation in which some of their constituents found themselves.’

‘The government’s knee-jerk reactions have contributed to the misery in some parts of the county and plunged the UK into the worst downturn of any major economy.’
‘Families up and down the county will continue to suffer if he doesn’t fix Britain’s broken safety net and tackle the root causes of income insecurity across our country,’ said Robert Evans. ’I’m calling on Surrey’s MPs to stand up and be counted!’ 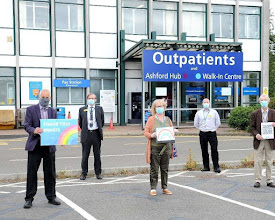 Chairman of the Trust, Andy Field and senior staff explained to the trio how they are coping with the COVID-19 crisis and their plans for the future.

Cllr Robert Evans said the team at Ashford and St Peter’s ‘at every level, need to be warmly congratulated for all you are doing, not just in these most challenging times, but every day, 365 days a year’.

Andy Field, commented, “It was a pleasure to welcome our local councillors especially in celebration of the NHS birthday. It is always great to engage with the community and their elected representatives and demonstrate some of the outstanding work we have been doing at the Trust.”

For Cllr Sue Doran it was a trip down memory lane as she trained as a nurse at Ashford, some years ago.
Cllr John Doran added, ‘We’ve been invited back for a more comprehensive visit, when times are easier.’
Happy birthday NHS – and thanks from us all.

British workers are “among the worst idlers in the world,”
This was a claim written in a book produced by five Tory MPs, four of them members of Boris Johnson’s cabinet, These include Priti Patel,
Elizabeth Truss, Dominic Raab,
and Spelthorne’s MP Kwasi Kwarteng.
Read more by clicking on below.
Brexit summary
industrial-revolution/
SAY 'NO' TO
KINGSTON
ROAD HOSTEL

The Tory dominated planning committee voted in favour of the Kingston Road Hostel. But the fight goes on.

Some of the advantages of being part of Greater London:
· We would automatically become part of zone 6, this would make rail fares cheaper for commuters going into London.
· All over 65s would get a freedom pass which would give them free rail and underground travel into London.
· More money spent on primary and secondary school education. Dedicated schools grant: Surrey per pupil £4,943.29; Hounslow per pupil £5,773. 11; Kingston per pupil £5,048.69.
· Being part of Greater London would give more status, as part of a world class city.
· Quicker emergency service back up times from neighbouring Greater London boroughs, than from across the river in Surrey.
· The cheaper fares would also encourage multinational companies to relocate, bringing more employment to our borough.
· Possibly Lower council tax, e.g. Spelthorne band D £1,915.51, Kingston band D £1,800.27.

The results of a recent survey carried out by us:

A Should Spelthorne become part
of Greater London? 91% yes

B Would you prefer to stay in

Surrey?
Surrey being divided into 3 or 4
unitary authorities or one big one
like Cornwall. 91% no 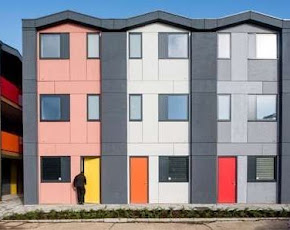 The above picture shows what has been done in Mitcham.
The 36 unit Y:Cube development in Mitcham, South West London, is an innovative low cost housing initiative for single people in housing need.
The first UK Y:Cube development, located at the corner of Clay Avenue and Woodstock Way in Mitcham, is a 100% affordable housing scheme providing homes for 36 people in housing need from the local area.

All of the 36 flats are currently rented out, with half of the residents coming from YMCA London South West’s hostel accommodation, and the other 50% nominated from Merton Council.
All tenants will have to be meaningfully engaged in either employment, training, education and volunteering. The referral process will be rigorous to ensure all tenants can live independently and be a good neighbour.

The scheme consists of 36 self-contained one bed flats. Each identical flat contains a living space that includes a galley kitchen, separate bedroom and an en-suite toilet and shower. Each flat have a net space of 26sqm.

The rent is to be set at or around 65% of the market rent for one bed flat in Merton. All properties will be let on an assured short-hold periodic tenancies with the anticipated length of stay being 3 to 5 years.

Homeless crisis “State pays rich to exploit the poor”
Landlords carving up a home into micro-flats can squeeze out £50,000
a year and it’s taxpayers who foot the bill.
Source: The Guardian