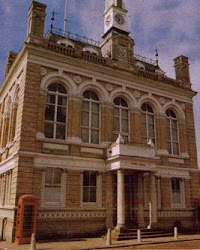 Its fate has been sealed

It was good to see that Kwasi has discovered the old Town Hall and put in some background history about the building in an article in the Villager. Most of the information could have been found on our website. But what he left out was that it was paid for by public subscription, and was eventually sold by our Tory council for £1.6 million.
The interesting piece of news that came from his article was that, “the old Town Hall is still looking for a role.” This suggests that it’s not going to be turned into luxury flats. If this is so we will certainly push to have it reopened as an arts centre.

We believe that Staines recent cultural decline is partly due to the closure of its Art Centre and also the Oast House. We will be contacting Spelthorne Borough Council to ask if they would consider re-opening the Old Town Hall as an Arts Centre; or offer an alternative venue.

The Old Town Hall in Staines is standing empty again. For those of you who are not familiar with its background. The Town Hall was built in 1880 financed by public subscription. The building remained a town Hall until 1976,when the town council moved to new buildings at Knowle Green. It was then used only for annual St David’s Day concerts, and the Board room was available for public meetings.

In 1994 after being closed for 3 years and £1 million of our money spent on a face-lift it was re-opened as an Arts Centre. The idea was to host:

In 1999 the Arts Centre was closed and remained empty for some time, and after more money was spent on repairing the roof, was sold for £1.6 million to Hope Town Properties who negotiated unconditional purchase including the lease.

Other buildings on the Tory hit list are Knowle Green Town Hall which now appears to be too large to house the council; also Ashford Car park and Brooklands College (Formerly Spelthorne College) opposite, which has stood empty for some time. And of course Sunbury Fire Station. All of these could become part of Hope Town’s portfolio or of A2 Dominion’s or in fact of any other property developer with enough money to tempt the Tory run council.

An Arts Centre once again

The Old Town Hall, the beautiful, iconic building in the heart of Staines, is lying empty and abandoned. Mould is already growing in the basement.

Once a Community Arts Centre, the Council having spent a fortune repairing the roof and equipping it as a performance space, then sold the building to a commercial company. The company converted the Town Hall into a pub, which has recently failed, and now lies empty and derelict.

It is shameful that the newly christened, aspirational 'Staines-Upon-Thames' does not have a designated Arts facility; in fact there is no theatre in the entire Borough of Spelthorne!

A local campaign is being built to press the Council to re-establish the Old Town Hall as an Arts Centre, for the community in the heart of our town.

If you're interested in getting involved, offering support, or just want to know more, please get in touch.

We will keep you informed