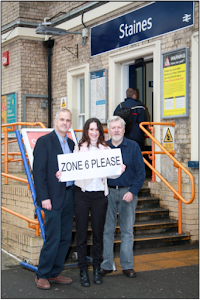 Since Labour started the campaign to get us into zone 6, other political parties have shown some interest. Although our MP Kwasi Kwarteng originally opposed the idea, the Tories have now jumped on the band wagon and have arranged various pro zone 6 meetings. Even UKIP now mention it in a leaflet!
At present there is even a reluctance to expand “Oyster access by South west Trains and Network Rail. The big problem is South West Trains would require some kind of compensation, at a time when Surrey is making big cuts — the latest being charging disabled people to park at Ashford and St Peters hospital.
Epsom is also is also trying to get into zone 6 with their MP Chris Grayling fighting hard for them, and thinks he can achieve it. Who do you think Surrey would favour?


Perhaps our best hope is to become part of Greater London,
instead of cash strapped Surrey!

of rezoning our stations.

CHEAPER RAIL FARES FOR ALL!

South West Trains have been looking into the infrastructure cost that would entail in rezoning our stations and extending the Oyster card scheme. They estimate that it could cost about £250,000 to install oyster card readers across the Borough, and in the region of £250,000 per station to install new gate lines.

Labour Cllr Robert Evans and I started a campaign to get Spelthorne into zone 6 over two years by contacting SWT and Transport for London, also our MP Kwasi Kwarteng, whose response at the time was quite negative. However pressure from the public in general including many Tory supporters has caused him to change his tune somewhat!

Our MP is due to meet SWT this September, but the impression given from information
that was put out by Mr Kwarteng is one of little hope in the near future. He seems more
interested in introducing smart card ticketing at our stations. He also mentioned that SWT’s
franchise runs out in 2017 and also that SWT are concerned about loss of revenue that rezoning could entail.

The total cost of about £1. 25 million to install oyster card readers, and new gate lines in
all of our stations, should not be a financial problem. Spelthorne Council are holding about
£33 million in reserve. In addition they have sold off Bridge Street car park for £21.4 million, plus there are other sell offs in the pipeline, which means they could easily cover the cost of installation!

It’s possible that SWT could loose some revenue, but that isn’t certain. The extra use of rail travel by Spelthorne residents might compensate for any loss. Even if there were a short fall, the difference could be made up by adding the extra cost to our council tax bands. But a more acceptable way would be to ask Surrey to pay any difference for the next ten years, from the £200 million PFI credits they got for giving permission to Sita to build the ill famed Eco Park in our back yard. Alternatively Sita might want to chip in from the £1.2bn they will be getting over the next 25 years.

Tory run Spelthorne Council might argue that all the money gained from the sell offs of publicly owned properties should go into making us self funded by 2020. But all they are doing is selling off the family silver, and when it is all gone we will be no better off, Staines will still look sad with more shops boarded up and restaurants half empty!

Spelthorne’s Business Forum believes that being in zone 6 will make a difference to those who commute into town each day, and would have a positive affect on all residential and commercial property prices. It will also have the effect of making it more desirable to commercial organisations to relocate their business, from expensive areas of London to here. Being in zone 6 will stimulate the whole of Spelthorne’s economy, with more people visiting the area and bringing extra trade to our shops and restaurants.

Our M.P Mr Kwarteng should do his best get us into zone 6 as quickly as
possible, and not fob us off with a 2 year wait
and a smart card ticketing system.

WE WILL CAMPAIGN TO BRING SPELTHORNE INTO ZONE 6
We believe that Spelthorne should brought into zone 6 because of its proximity to Heathrow Airport, Kempton Park, Thorpe Park, Shepperton Studios and a prison; all with London links. We have London Buses that come over the Greater London boundary into the heart of Spelthorne. It's possible to use a zone 6 travel card or an Oyster card on the buses in the borough but not on the trains.

About 70% of Spelthorne's working population travel to work by car. We are sure that many would use the train if they could get a fairer deal.

Do we meet the criteria?

13 stations are further away from central London (Westminster) than we are. We believe that we more than meet the criteria.

If Spelthorne were in Zone 6, fares to and from London on trains, underground and bus would be cheaper, The money saved could help to stimulate the local economy, it would also help to protect property values.

Cllr Evans added, ‘This is only the first step, but it’s an important one. My Labour colleagues and I will now need to take the plans to South West Trains and then the Department for Transport, but without TfL’s support it would have got nowhere'.

Another local Labour campaigner John Johnston from Laleham added, ‘there are already some 23 stations, outside Greater London in Zone 6, 13 are further out than we are, so it’s not unreasonable that we should ask to include Spelthorne’s stations in the Oyster Card area.’
FURTHER GOOD NEWS! (10/2/14)
South West Trains has approved on principal, to one of our stations being moved into Zone 6 subject to the Secretary of State approval and appropriate agreements being made between South West Trains, Transport for London and the DfT.

We will be putting a robust case for more Spelthorne stations being included, as we think that it will not only be beneficial to Spelthorne but ultimately will bring extra revenue to SWT.

We have also brought our proposals to the attention of our local MP, Mr Kwasi Kwateng but he seems to have no interest. As Mr Kwateng was a member of the Transport Select Committee it would be useful if he were to get involved. His fellow Conservative MP Chris Grayling has been campaigning hard for Epsom, and the green light has been given for the train companies to press ahead.
Spelthorne Business Forum backs plans for Zone 6
Spelthorne Business Forum has backed proposals that parts of Surrey closest to London, including Staines-upon-Thames, become part of the capital. Planning consultant Barney Stringer has asked whether it is time to redraw the London map.

Alex Tribick, from the business forum, said zone six of London's fare system should be expanded to all Surrey stations within the M25.He said Surrey residents outside zone six faced difficulties and cost rises and, from an economic perspective, the move "ticked all the boxes". "It will make a difference to people who every day make their way into town, and will have an effect on all residential and commercial property prices," he said.

"It will also have the knock-on effect of making it desirable to commercial organisations being prepared to relocate their business from the exorbitant business rate area of central and west London to somewhere far more green and leafy like Staines-upon-Thames, which is part of the reason we renamed the town."
'M25 mental boundary'

Mr Stringer, from planning consultancy Quod, said London's population was heading to more than 10 million, the city had housing pressures, and suggested surrounding areas could help.

The M25 was the "mental boundary" to London for many people and Epsom, Elmbridge and Spelthorne boroughs were already dependent on London for jobs with high commuter flows, he added.

But Surrey's Tory politicians object to the plan.